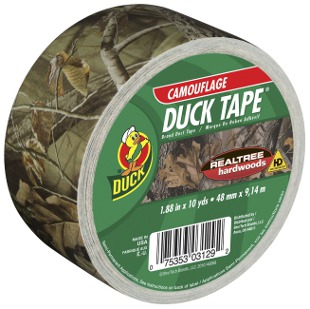 As any guy who has a man cave knows, picking the right theme sets the tone for everything else. However, in a man cave there are no lace curtains or anything colored in pink or any other color that’s not considered macho. The modern man room uses rough and tough stuff like duct tape to decorate any and all aspects of the room. While duct tape had long been considered a staple of workshops and garages, the duct tape available today is not your grandfather’s duct tape. In addition to the plain silver tape that used to be the one and only choice, today’s Duck Brand duct tape is available in all kinds of manly styles such as sports, hunting, racing and many more patterns for your man cave ideas. There is also Scotch brand duct tape with many colors and patterns from any man cave decor.

Click here to see many of the Duck brand styles.

Click here to see many of the Scotch brand styles.

While the styles of duct tape are almost endless, so are the possibilities for them when used in your man cave. This makes duct tape the best man cave decor accessory. You can wrap your man cave furniture to match any man room décor turning that pink chair from the kitchen into a manly colored chair you can be proud of.

Since a requirement for being a manly guy is liking anything that goes fast, using duct tape that has a checkered-flag print can let you build your man cave around a racing theme. Let your imagination run wild as you wrap pillars or poles in a basement with the tape, or perhaps put a line of it on the floor at the refrigerator door and then see who can get there first to grab the last cold beer. If the man cave happens to be in a garage, lay down a line of the tape at one end of the room and then race around on mechanic’s stools to see who wins the title of Fastest Guy in the Garage Man Cave. If you’re ready to start your engines, check out this tape.

No man cave is complete without having a group of guys sitting around watching the big football game on an even bigger television. And there’s no need to fear, because there’s plenty of duct tape that also fits this occasion. If you’re a fan of the NFL, you can use duct tape that has the team logos and colors of all 32 teams. Of course, since all man cave guys like a winner, it’s only fitting to use the duct tape of the defending Super Bowl champion Seattle Seahawks. Rather than having a plain garbage can in the man cave, take some duct tape and cover the can in your team’s favorite colors. Magazine racks can also be covered in duct tape, letting you have a football-themed man cave that will be the envy of all your friends. If you’re wanting to get the can covered before game time, check out the tape of the Seahawks and other NFL teams at 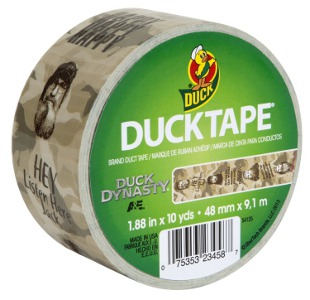 While most true man cave guys make it a point to not watch girly reality shows like “Honey Boo Boo”, there are always exceptions to the rule. Once in awhile, a show comes along that makes the grade with man cavers everywhere. This has been the case with “Duck Dynasty,” the popular show that proves you can still keep your man cave membership while admitting you watch a reality show. Following the adventures of the Robertson family, the show always combines lots of things man cavers love such as hunting, fishing, down-home humor and more. If you want to pay homage to Si and the whole gang in your man cave, get some Duck Dynasty-themed duct tape and turn your man cave into a shrine to the Louisiana family. Take some cardboard and cover it in layer after layer of duct tape to create some custom-made pictures for your walls, or cover your refrigerator doors for a unique look. If you want to go all-out and have a complete Duck Dynasty theme, you can take the tape and cover an old couch or chairs you have in the man cave, then sit back and watch the show in style. The best part about this tape is that it doubles as camouflage for your duck blind or deer hunting stand.

Whether you’re wanting a football theme, racing theme or hunting reality show theme there are plenty of styles of duct tape to let you decorate your man cave however you want. In addition to these, you can also find duct tape with Major League Baseball themes, college themes, NASCAR themes and much more. Because your man cave is supposed to reflect your personality, you can spend hours customizing your man den to create just the right man cave decor for you and your buddies to catch the big game, play a hand or two of poker or just kick back and talk about cars, trucks and all other things guys are supposed to discuss. While duct tape is often overlooked as a source of man cave decoration, if used creatively it can turn any cave into a palace and turn ordinary stuff into man cave works of art.