For true man cave guys, football isn’t just a game. It is a spectacle to be revered and worshipped by those who live and die by each dropped touchdown pass, and it’s an experience only real man cave guys can understand. Fortunately, it’s easier than ever to turn our man caves into shrines for our favorite teams. Whether you’re an NFL fan that has a standing reservation on your couch Sunday afternoons or a college football fan that lives for Saturdays each fall, there are plenty of man cave items you can purchase to make your man room a place to remember.

As we all know, the man cave must have many comfortable chairs and sofas to sit on while rooting our team on to victory. Whether you’re looking for a recliner to kick back in for hours or a sofa that lets you stretch out for a quick nap during halftime, there’s no shortage of football-themed furniture to fill up the man cave. A great example of a man cave football recliner is the NFL Fan Favorite Recliner and these come in MLB team colors too. Very affordable, it’s a great way to be comfortable while watching your favorite team. Decked out in team colors and complete with team logos, it’s a great addition to the man cave. If it’s a sofa you need, one of the coolest that we’ve found is the NFL Convertible Sofa. A great addition if you’re wanting a more casual look to your man cave, it can be adjusted to three different positions and lays out flat like a bed if needed. As an added bonus, it’s got a drop-down snack tray in the middle that fitted with cup holders, letting you have your cake and eat it too while catching the game. Available in both NFL and college team themes, it’s a great deal.

Man Cave Items for the Walls: Posters and Pictures

If you really want your man cave to feel like a football shrine, it’s got to have some great wall decor. And let’s face it, nothing says true football fan like having autographed posters of your favorite players hanging on your walls.  These man cave items can come in the form of inexpensive posters, football graphics from Fathead, or autographed framed pictures. Today’s posters are not like what you had on your bedroom walls as a kid. Instead, they come in frames and are on high-gloss paper that turn them into works of art rather than mere pieces of paper on a wall. We’ve found some great man cave items that depict both college and NFL players at their most triumphant moments. If you’re an old-school man caver when it comes to the NFL, you’ve got to have the autographed poster of former N.Y. Giant quarterback Y.A. Tittle on your wall. Personally signed by the QB and complete with certificate of authenticity, it shows Tittle kneeling in the end zone after a tough game. If it’s college stars you want to worship, consider the Vince Young poster. While his NFL career has fizzled, there’s no denying he was one of the all-time greats in college. This poster shows Young sprinting into the end zone during the national championship game against the Trojans of Southern Cal, as he led his Texas Longhorns to the Rose Bowl win and a place in history. If you’re a Texas fan or just a college football fan in general it’s a must-have for the man cave.

Every man needs a cold beer in the fridge on game day and the best way to show your pride is to pull a cold one out of your NFL football team refrigerator. These fridges come in every team color and hold plenty of beverages, up to 24 twelve ounce cans. Even better if you decide to tailgate at the stadium you can take the fridge with you because it will run off car lighter socket or home outlets.

All good man caves need plenty of kitchen gadgets to make sure food is always available. As we all know, one rule of the man cave is no one shall ever be hungry before, during or after the big game. Since some big games have early starting times on Saturdays or Sundays, it’s sometimes necessary to have breakfast in the man cave. When you’re wanting a good piece of toast in your man cave, a great and inexpensive piece of essential equipment is a toaster complete with your favorite team’s logo. Ranging in price, it looks great on your counter and is sure to spark conversation while waiting on that perfect piece of toast. Some are available in team colors, while others may be black or silver and display a team logo. As an added bonus, each piece of toast comes with your team’s logo burned into the bread, giving you a piece of toast you can be proud of while showing there’s nothing you won’t do for your favorite team.

During the game there is nothing better than to head over to the NFL crock pot or slow cooker and in reach to get some piping hot chili with corn bread on the side. These crock pots come in all NFL team colors and proudly display your teams logo. In addition to chili, you can also do a stew ahead of time and keep it hot while the game is on. If chili or stew isn’t your thing then a crock pot filled with little smokies hits the spot with that tangy sauce. Here is one our favorite recipes which is really simple and any man cave dweller can follow no matter the skills in the kitchen.

Ingredients:
1) One large bottle of your favorite BBQ sauce
2) Two packages of cocktail weenies with about 30 per package
3) One large can of crushed pineapple
Directions:
Place all ingredients in slow cooker on low for about 45 minutes to an hour. This is a simple, cheap way to satisfy a group of hungry football fans! it only costs around $10 to feed 6 or 7 people. 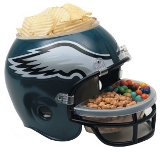 Whether you’re expecting a big crowd for the day or you’re flying solo in your man cave, you’ve got to have plenty of bowls filled with snacks and other essentials. One of the best bowls we’ve found is the NFL Snack Helmet or the college football snack helmet. A full-size replica helmet, it comes with a two-compartment tray in the facemask and a large bowl in the top of the helmet. Both can be put in the microwave to heat up nachos or anything else your stomach desires, giving you and your buddies an interesting way to eat chips, candy and other fine foods. All NFL teams and most college teams are available, so break open those bags of chips and M&M’s and fill up your helmet.

Of course, you need a table to set your snack helmet on, and there are some good ones out there as well. Some of the best are the side tables made by Imperial. Made of select hard woods, these tables have a team logo on the top section. However, the top section panel is reversible, so if you need the table for another occasion you can simply flip the section upside down to have a standard table at the ready. Reasonably priced, these tables are a great addition to any man cave. If you’re interested, they also offer an NFL coffee table.

So whether it’s college football or the NFL, there’s plenty of items out there to help you root for your favorite team in the man cave. If you can’t find the item you want in your favorite team’s colors then you can do what any man loves to do… wrap it in duct tape. Duck brand duct tape comes in enormous numbers of team logos from a wide variety of sports and plenty of other manly patterns like wood paneling, camouflage, mustache and Star Wars. So no matter what man cave ideas you have, there is no excuse, now you can wrap that support beam in the basement (or anything else on the planet) with your team’s logo.

The number of football man cave ideas are endless. So after getting everything you need to prove you are indeed your favorite team’s biggest fan, you can sit back in your recliner, turn on your HD television, grab a beer from the fridge and eat some little barbequed sausages. Does it get any better than this?