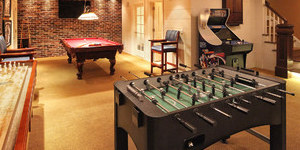 As anyone with a game room knows, it’s got to have some games to play while hanging out with your friends. Until the pizzas arrive, there needs to be some entertainment to make life interesting, and these games do just that. Whether it’s a classic pinball machine, a fun board game, a quick game of darts or playing a game of cards there’s always something to do in the game room. When you’re deciding what games to include, the good news is there’s plenty of game room ideas from which to choose. In fact some man caves are really game rooms full of fun, strategy and excitement.

Whether you’re watching March Madness, the NBA Finals or just in the mood for a game of hoops, there’s nothing like having your very own basketball game in the game room. It’s always fun to see who can hit from downtown or go inside for a monster slam, and with these games all that and more are possible. If you’re on a tight budget and still want to bring the basketball court indoors to the man cave, one of your best bets is the SKLZ Pro Mini Basketball Hoop. It’s an indoor mini hoop with the feel of an outdoor one. Able to be mounted on the wall or over a door, the backboard is shatterproof, so you don’t have to worry when you’re showing your friends how you could have won the Slam Dunk championship. Extremely durable, it’s gotten lots of great reviews from other satisfied man cavers and lets you say goodbye to Nerf basketball.

If it’s more of an arcade-style basketball game you want, the Lifetime Double-Shot game may be for you. It lets you and a friend see who’s the best shot. With an adjustable height from 82″-90″, it comes with seven basketballs to give you plenty of opportunities to hit the game-winning shot. Folding up for storage, it comes with electronic buzzers and scoring systems to let you and your buddies settle once and for all who is the best hoops player of the group.

For anyone who grew up during the heyday of pinball machines, there’s nothing like the fond memories of going to the neighborhood hangout and playing a few games of pinball on a Friday night. If you’ve always been a pinball wizard and played a mean pinball over the years, you might want to consider adding your very own pinball machine to the game room. However, be aware that this will probably be one of the most expensive acquisitions you’ll make for your man cave. Stern pinball machines, considered the best in the industry, provide an easy way to get the pinball machine of your dreams. You’ll get a quality piece of equipment that will give you and your friends years of great entertainment.

Available in a variety of themes, Stern pinball machines can fit into practically any man cave. For those of you who want to release the rock star that’s always been inside you, there’s the Metallica and AC/DC versions that are sure to have you doing your best air guitar concerts. If you consider yourself a superhero inside your man cave, you can always go for the Avengers and X-Men versions. Any way you want it, that’s the way you’ll get it with a Stern pinball machine. The machines are traditional coin-operated and full-sized, just like the good ol’ days. Featuring designs by iconic pinball designer Steve Ritchie, they come with pre-programmed songs on sophisticated sound systems, letting you hear every word of every song while settling the score once and for all on who is truly the pinball wizard of your man cave.

While pinball is fun, there’s nothing quite like playing some classic arcade games in your man cave. The classic of the 1980’s, these games are sure to make any time in the man cave more exciting. Like the pinball machines, these games don’t come cheap, costing anywhere from $1,400-$3,000. But if it’s something that can fit into your man cave budget, it’s well worth the money. One of the most popular arcade games in today’s modern game room is the Arcade Legends 3 Upright Multi-Game Machine. Looking just like the ones found in your favorite after-school hangouts, this game comes with a whopping 130 games installed and ready for play. All of the classics such as Space Invaders, Asteroids, Centipede, Food Fight, Golden Tee Golf and many more are included on this machine. Featuring pre-game tutorials and an easy to navigate menu system, you and your buddies may never get around to watching the big game once you get started on this machine. Very well-liked by previous purchasers, this game has a 26″ screen and all the classic joysticks, allowing each and every player the chance to relive the golden age of arcade games.

If you want a less expensive version, the 60-in-1 Multi-Arcade Cocktail Version is a good bet. It offers a 19″ LCD screen and such classic games as Donkey Kong, Frogger and Ms. Pacman. It’s a big favorite of those who love an old-school style of video game, so if you want something that will provide hours of entertainment for yourself and your buddies you can’t go wrong with this game system.

Sometimes in game rooms, it’s more fun to get back to the basic games of skill. One of the most popular is darts, and if that’s more your style there are plenty of modern versions of the grand ol’ game that are sure to please. Very affordable with prices ranging from $25-$50, these dartboards come with everything you need to have lots of fun while testing your skills and nerve.

Maybe the best basic dartboard available today, the Winmau Bristle Dartboard has it all. Named best in class for its performance, it’s made with very strong yet thin wiring to eliminate most bounce-outs and deflect the arrows into a target area. Be aware that it comes without darts, so you’ll need to buy a set of steel-tipped or plastic-tipped darts to go with it. Coming complete with hardware to mount it to your wall, depending on your accuracy you may want to get the Dart World Wall Protector to protect your walls. Fitting most standard bristle boards, it’s made of high-density foam to capture any stray darts on the off-chance you and your buddies miss the target now and then. If you’re wanting to spend a few dollars less and still have a quality dart game, consider the Doinkit Darts. It’s great if you have some junior members who want to get in on the fun. With this board, you don’t have to worry about the darts hurting your wall or anyone else in the process. Considered one of the best magnetic dart sets available, it’s a great alternative if you want a safer version for the kids.

Board and Card Games

Of course, no cave is complete without some good ol’ fashioned board and card games to play. Sometimes when the man cave plays host to the entire family, it’s great fun sitting around playing board games with one another. These days, board games are not quite what they used to be. Some of the most popular are Monopoly-like games made by manufacturer Late in the Sky, featuring games named Zombie-Opoly, Golf-Opoly, Cat-Opoly, Brew-Opoly, Monster-Jam-Opoly and Wine-Opoly these games are designed to play like Monopoly but have certain themes such as zombies, wine, golf, beer and dogs. Other games are designed after colleges such as the University of Kentucky and University of Texas, giving fans of those schools a real thrill.

Another popular board game is Settlers of Catan by MayFair Games. A great family game, it costs less than $40 and comes complete with a rules book and is great for those who are into fantasy. For a more mature group there is Cards Against Humanity a party game. Yet, after some of these games it’s time for the boys to get down to business and have a serious game of poker. When this is the case, the Da Vinci Premium Poker Set is ready and waiting. At less than $70, it has everything needed to get the game rolling and keep it going for hours. A cool feature of this set is the cards included with it are ones used in actual Las Vegas casinos, so hopefully Lady Luck will still be on some of them.

So no matter who you plan to have in your game room, there are plenty of game room ideas to entertain them all. After deciding on your budget, start shopping and don’t stop until you’ve got all the games your room can hold. After that, call up your friends and get ready to have some fun!