Home / Ideas & Themes / Cool Technology to Include In a Man Cave

In today’s modern world, a man cave not only fits the personality of its owner, but also has the latest technology as well. After all, a man cave is not a true man cave unless it’s got many items that will make all those who enter green with jealousy. Today’s man cave is a high-tech cave, complete with HDTV and other gadgets sure to put the high in high-tech. When it comes to choosing just what kind of cool technology will find its place in the man cave, there are many options from which to choose. 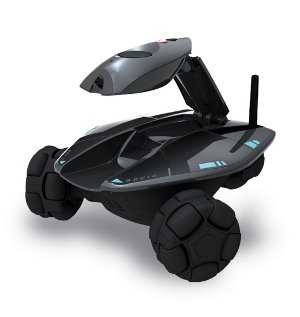 One of the coolest kinds of high-tech gadgets for the modern man cave is the WowWee Rovio. The Rovio is a rechargeable drone on wheels that can be used to monitor your man cave 24/7. Using wireless internet connectivity, it’s a great way to make sure there are no unauthorized visitors in your man cave and also make sure your significant other doesn’t try to put a feminine touch on your manly surroundings. The ratings on Amazon were poor when it was first release now the Rovio is getting excellent reviews after the manufacturer made several upgrades.

If your man cave happens to be in an upstairs room or in the attic, you’re going to need something really cool with which to look out over the land still waiting to be conquered. To do this, try the Parks Astrolight AZ6 telescope. It’s a bit pricey but a great item to have when you want to scan the universe for distant planets you may want to visit at some point. Who knows, you may find yourself wanting to boldly go where no other man caver has gone before.

If you’re like most man cavers, you know even the best man cave gets a little messy from time to time. However, rather than having your wife or girlfriend come in to clean up the mess and ask why you have such messy friends, just buy yourself an iRobot Roomba. A robotic vacuum cleaner, it will work tirelessly cleaning up your man cave and never complain about the mess you and your friends made the night before while watching the big game. So go ahead and let the pretzels and chips fall where they may, for the iRobot Roomba will be more than happy to clean them up.

For those extra-special man cave dwellers who may have the luxury of having an entire basement or garage as their special spot, there are times when you’re just too tired to walk from one end of the room to another. When this is the case, there’s no need to worry if you’ve got a Segway i2 Commuter next to the couch or recliner. If you happen to have a spare $5000, you can purchase one and use it to see how quickly you can get to the refrigerator and back on the couch before the commercial break is over. And if the game gets out of hand, you and your buddies can go outside and take a spin around the block, reminding everyone that men really are just overgrown boys.

As all good man cavers know, the ultimate man cave starts and stops with the television. Watching the big game with friends or the latest macho action-packed adventure movie requires a television that will not only have a great picture, but be big enough to blow the minds of everyone in the man cave. If you’re all in on your man cave and have a spare few dollars in your wallet, go ahead and buy the LG Ultra 84-inch HD television. That’s right, this is the television you’ve always dreamed of but never thought you would see in your lifetime. Using technology that is four times the current level of high-definition broadcasting, the LG Ultra will make sure every image on the screen will display even the slightest details. So when you’re trying to decide if the receiver made it to the first-down marker, the LG Ultra will let you see every blade of grass between the ball and the marker on the field, leaving no doubt in your mind if he did or not.

While some of these items are priced rather high, can you ever really put a price on what makes up the ultimate man cave? Whether it’s a huge television, a robotic vacuum cleaner or a telescope that lets you see that annoying neighbor heading toward your man cave, these items offer some of the latest technology that’s sure to turn you and your man cave into living legends.